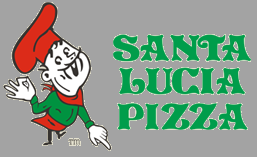 I'd always heard the pizza from Santa Lucia was the stuff of legends. Or at least that it lived up to its award-winning hype. In all the years of living in Winnipeg, I had never tried it - until now. Having been awarded the 'Best Pizza' for several years (from Consumer's Choice, Taste of Manitoba, Uptown Magazine, the Winnipeg Free Press, and the Winnipeg Sun), as well as 'Best Garlic Bread,' 'Best Food Booth,' and 'Best Family Restaurant,' it's a surprise even to me I haven't eaten here sooner.

I didn't have any expectations going into it, other than that this was apparently supposed to be one of my best pizza experiences ever. We ordered the Santa Lucia Special, which was topped with pepperoni, bacon, mushrooms, onions and green pepper. What arrived to our table was a thick, piled-high pie.

For me, the crust was probably the best part: the texture and taste were delicious, and were not lost underneath the layer of toppings. The crust definitely had a noticeable presence. What was also noticeably present, unfortunately, was grease, pooling on the pan like water. It was speculated this occurred because of the amount of cheese (or they may have actually sprayed it with water), and while this may in fact be the reason, the sight of it was in some ways a turn-off. Nevertheless, although the grease was graphic, it did not overpower or affect the taste in a significant way - or really at all, that I can remember. Each ingredient could be tasted with every bite - and with a pizza this thick one would hope so. The amount of cheese was a tad disproportionate, nearly stealing all the palate's attention. Some might wonder if this is really a bad thing, but with pizza it is; you really want to be able to taste the other toppings, such as the meat and the vegetables, or you should just order a cheese pizza. In the end, the over all balance was rather good. One of the down sides however with stacking a pizza so high is the fact that it took merely three pieces to make me start feeling fairly full.

Hence, I wouldn't say this is the best pizza I've ever eaten, but I'd certainly go back. The thing I most take away from this experience is that it is possible to find a pizza that seems like it was made at home.