advent as the exemplum of life

December officially marks the beginning to one of the most popular and overwhelming seasons of our Western world's calendar. It is a time when the atmosphere of our society changes dramatically, manifested visually by the varying degrees of seasonal displays - from lights to trees and ornaments to a yard full of robotic and inflatable monuments. People start dressing in manners more attuned to the so-called colours of the season; baked goods change their tastes and shapes; the music played is not at all what you hear at any other time of year; and the rhythms of life take on a jovial, mirthful beat. 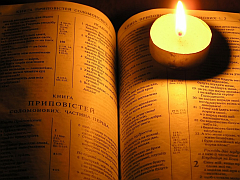 Generally speaking, the secular world recognises the fact that Christmas has traditionally been held to commemorate the birth of Jesus, whether that means anything spiritual to them or not. Typically, sentiments of joy, peace, and love are thrown around as the reasons for the season - and smiles are easier to have returned as a result. For the average Christian, hope is added to the list because of the God-man's entrance into space and time. All these things are ubiquitous throughout December in jolly overtones as families, friends and co-workers gather every weekend in turn to take part in festivities - giving gifts, singing songs, and having a merry time together in the name of Jesus' birth. The joy, peace, love and hope of Christmas has exploded beyond its bounds to colour each and every day of December giving us a month-long Festival of Christmas - a month, in fact, of the Holidays.

The unfortunate result is that Advent and Christmas have been forced into the same season - the Christmas/Holiday Festival has overtaken the month of December, usurping Advent and collapsing it within its folds. We observe Advent in idea, but not in spirit. We're so impatient for the good news, the gifts, and the joy of Christmas that we have forgotten how to wait for it. December hits us like a storm, and immediately the Holidays begin in a flurry of cookies, music, tinsel and wrapping paper. And Advent is forgotten.

The liturgical season of Advent was historically a solemn time of year. Like Lent, Advent was a time of meditation and fasting - it had a somber ambience, and a highly spiritual focus. Evidence of its official observance exists from as early as the end of the fourth century, however, there is no certainty of when it was introduced. Still, a tradition of associating black with this time of year had been established by the time of Pope Innocent III (1199-1216), while purple was added by the thirteenth century. Some sources command that pictures are to be covered during this season, and flowers are not to be present within churches (except on Sundays); marriages were not to take place during Advent - not even to be mentioned during services - and abstinence within marriage was commonly practised. Moreover, joyful hymns of praise and thanksgiving were often omitted from worship - although Alleluia remained within the Catholic Mass.

These sorts of things are foreign to our typical Advent observance. Sure, some of our church services are more serious, but the overall atmosphere that runs through our families and congregations is over-eager, zealous anticipation.

Largely, this is the fault of secular infiltrations such as Santa Claus,1 songs of directionless peace and hope, and the false sense of unity, humanitarianism, and frienship - the infusion of a politically correct general sort of love. These things begin with the arrival of December, pushing aside any notion of waiting and replacing it with a season of overwhelming Holidays.

But it's also our fault. Because we are impatient.

Our tendency is to avoid despair and pain; we'd much rather have satisfaction and pleasure - we'd much rather run straight into happiness than meditate on the uncertainty of hope. December for us has become a season of merry and jovial fellowship - and for good reason because we know what Christmas means. We know the meaning of Jesus' birth, we know the impact it brings. But we forget about the season of Advent - the season of apprehension and trust, of longing and hope; of questions and faith, stillness and prayer.

And so it is with life. We await in the violence, in the sorrow, in the injustice after years of Adonai's entrance into the realm we inhabit. We await with uncertainty as to what the future might bring, wth our doubts in hand about the plan for life, with our questions of whether Adonai is even listening anymore. We await upon our knees, with our tears upon our cheeks.

We await amidst the darkness of Advent for His coming, for His salvation.

1. I mean Santa Claus as distinct from Saint Nikolaos, Bishop of Myra in the fourth century, after whom Santa Claus was initially modeled. He is known not only for his anonymous gift-giving but also for performing a number of miralces, such as multiplying a ship's load of wheat to combat a famine. A feast in the saint's honour is traditionally held December 6th.