reflections on lent: atonement, a conclusion

For the Jews, Passover is and always has been one of the most important festivals of the year. Because, as we have seen, Jesus not only died during the time of Pesach but in fact at the time of the paschal slaughter, it is crucial for us as Jesus-followers to understand what the Jewish meaning of Passover is in order to fully understand what God was doing on the cross. 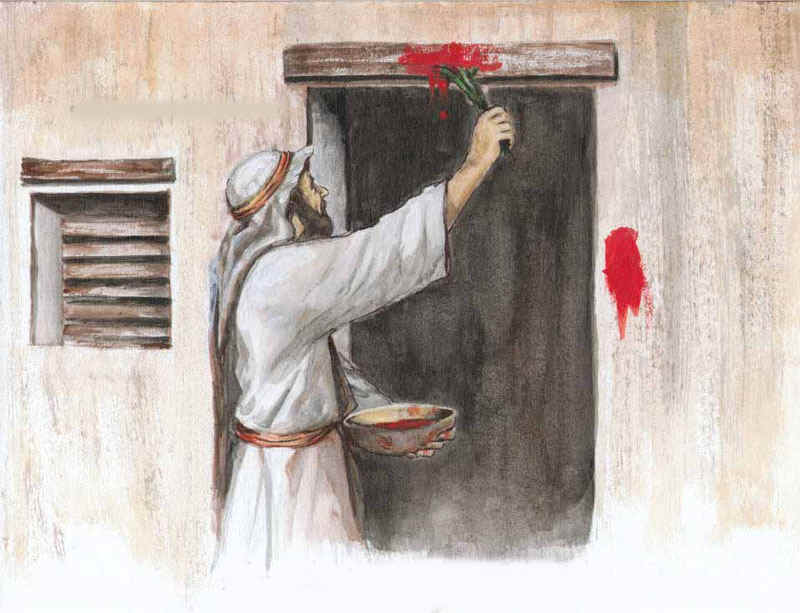 Applying the lamb's blood to
the doorposts à la Exodus 12:6-7

Similarly to Communion, Passover is currently observed primarily as a memorial: it is designed to point back to the first Pesach that is recorded in Exodus, commemorating the divinely-led deliverance of the people of Israel from their bondage in Egypt. In this way, it acts not only as a reminder but also as a 'thank you.'1 However, it is a thank you not simply for the rescue, but for the mercy extended to the people by way of the paschal blood: the Israelites were spared the devastating fate of the final plague when they followed the command to paint the sacrificed lamb's blood on their doorposts and lintels. Thus, subsequent celebrations to the first Pesach were held to keep in mind Adonai's presence and compassion (personal-ity), as well as to remind the people that the Holy One, blessed be He, listens to their cries and has the ultimate power to free them (providence).

Passover is z'man heyruteinu, 'the season of our freedom;' in a word, it is observed as a memorial of redemption.

Ever since the Fall, humanity has spiraled away from Adonai; we have become further and further enslaved to our own sinful desires, to our yetzer hara2 - our 'evil inclination' - and by this a wedge is further driven between us and our Creator. Pesach symbolises the sanctification of a people, as well as the establishment of a covenantal relationship between them and Adonai. They were not simply removed from their place of oppression, but they were in fact moved into a place where they could worship Elohim freely and only. Passover is the drawing of a people into the flock of the Good Shepherd, closing the gap between humanity and our God.

The Israelites became a free people through Adonai's work in the Exodus: they were physically liberated from Egyptian slavery. Moreover, they were spiritually, mentally liberated and it is as such they traveled to Mount Sinai to receive the Law (Torah), which was life.

Jesus, as the paschal sacrifice, liberates us. While many - but not all - Jews were expecting physical liberation from the Roman overlords, Adonai exacted the 'half-salvation' of spiritual liberation, with physical deliverance (the other half) to be realised at the Second Coming, inaugurating the World to Come. This spiritual deliverance came by the blood shed at the cross - blood metaphorically painted on our doorposts and lintels. It is because of Jesus' sacrificial death as the paschal lamb that salvation has come.

In his Lenten blog, Algorithms of Salvation, Dr Richard Beck argues that the atonement cannot be understood within any parameters of theological 'machinery and mechanisms,' which only serve to limit Adonai, boxing Him into a 'system.' Instead, he suggests, the atonement must necessarily - and only - be understood through a lens of divine self-sacrifice and love. While I don't entirely disagree with Dr Beck's push towards kenosis3 and divine love, I do believe that biblically the Gospels are showing us that Adonai has chosen to operate under a certain framework to bring about His salvation for His people. If this were not so, the narratives of Jesus - as well as Paul's epistles - would not have taken certain measures so as to ensure we view Jesus' death on the cross as a paschal sacrifice.

The three major models of atonement are, in broad strokes and as an interconnected whole, quite valid - each having their own contributions to our understanding - still they do not paint the full picture. The crucifixion of Jesus was the sacrifice that gave us, Adonai's people, the blood by which the Great Judge will pass us over. It is a gift - even as the first Pesach was - made more profound by the fact the paschal lamb was the human incarnation of the Creator Himself. It is by His stripes we are healed (Isaiah 53:5), freed from bondage to be in relationship with Him.

Did Jesus die to defeat death? As a by-product, yes. Even as in the first Passover, the end goal is a people's freedom - our freedom - and death was overcome as a mercy, through the display of power by the one true God. In the same way, Jesus died because of our sin insofar as it was our sinfulness we were under bondage to, and therefore needed the paschal lamb's blood to free us. Jesus did not necessarily die in our stead; we are certainly deserving some form of punishment for our rebellion, but the paschal lamb was not understood as taking the place of the firstborns and in that way saving them. Nay, the paschal lamb and its smeared blood was a sign of Adonai's mercy, grace and favour. This was not the act of a vengeful deity, as some extremists make it out to be, but instead the act of a loving one, desiring His people's freedom and therein their well-being via life lived with Him.

Throughout the Torah4, the formula for covenental pardon was blood, and Jesus as the paschal lamb made the ultimate (in all sense of the word) sacrifice. Our modern/post-modern and Gentile minds don't quite understand this concept, but taken in context, this was the final act of Adonai to free His people: He provided the unblemished sacrifice - submitting Himself to being murdered, shedding His own blood - for our liberation, opening the way to new life.

1. Accordingly, Communion is also known as the Eucharist, which comes from the Greek ευχαριστια meaning 'thanksgiving.'
2. In Jewish theology, the yetzer hara is an impulse or urge originiting within the human's free will, which inclines toward self-fulfilment, pleasure, property, etc. When left unchecked, the yetzer hara leads to immoral, destructive behaviour: it drives a person to attempt at creating a life that is his or her own, built upon their own whims and desires, directionless potentiality - and stopping at nothing. However, the passion of the yetzer hara can be redirected and focused by the yetzer hatov - the 'good inclination' - towards a godly, moral, righteous life.
3. The Greek word κενοσιs is related to κενοs, which translates as 'empty,' and κενοω, meaning 'to empty.' In theology, kenosis refers to Jesus' self-emptying when He came to Earth as a human male. See Philippians 2:6-7.
4. This is also spoken of in Hebrews 9:11, where it is written that 'without the shedding of blood there is no forgiveness.'