the fear of miracles

Four years ago, I sat trapped at home with a torn ligament and a cat as my constant companions. While it was a humbling experience, it was also a very strange time in my life - in fact, I went so far as to name it the strangest.

I'm going to correct and re-position myself on that claim. Granted, I did qualify the declaration as arbitrary, backing up a little to say it was only one of the strangest times, and I'll readily admit that I'll probably never stop thinking my life is getting more odd as it progresses. Yet, this place in life wherein I find myself has surpassed those three months of crippled, feline-filled confinement in leaps and bounds - these circumstances are in fact so bewildering, I'm not even sure I've fully accepted or grasped the magnitude of what is happening.

Five years ago, if you would've told me I'd get married, I more than likely would've scoffed at you. My mother can vouch that on numerous occasions I proclaimed I would never marry; for a number of reasons, I never truly thought I was the marrying kind, going so far to even believe I was called to remain unmarried and to devote myself to other sorts of lifework - to follow a different set of priorities and responsibilities. I believed I was not made for romantic relationships, and that was that - end of story. Sure, I grasped at it on occasion, playing games, but deep down I never thought it would end in anything other than disaster - I even hoped and wished for that disaster. But Adonai, in His wisdom - and knack for setting course in a different direction you think you're headed - had other plans.

Quite a while ago, I encountered this girl in my friends' college and career group at church who struck me as quite attractive, but of whom I told myself was too out of my league to moon over - even too far above me to make into a muse for poetry. She was too intelligent and mature - she was older, independent, established, and, quite frankly, I thought she was pretty cool. She was cut from the type of cloth that was hip and care-free, while still profoundly thoughtful and wise. And she possessed these beautiful eyes that drew - that demanded - attention, as well as a bright, beaming, contagious smile. Still, I was a lowly, immature little boy who didn't know much of life, love, or, well, anything, really. I was full of questions, despair, doubts, and self-convictions. And I wasn't made for that kind of relationship, anyway, remember? I knew I was called for something else - I knew it was put in me to be a solitaire. Because I didn't belong anywhere. And nothing was real except tragedy, except loneliness, except sadness - except darkness.

But here I am, three and a half years married to that pretty girl with the pretty smile. Several years after brushing certain notions off, coincidences fell into place, arousing opportunity, and that intriguing soul became my guitar instructor. A few years after that she became my wife. And for four and half years I've been learning how to be happy - and I've actually and truly been happy - and learning how to live, and how to love. How to be something I'd never thought I'd be. 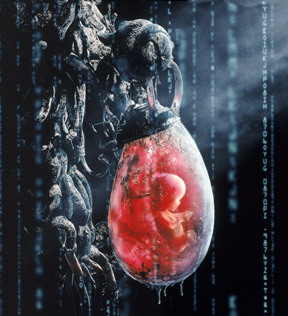 Baby pod from The Matrix.

And now that beautiful girl with the gorgeous smile, and those precious eyes, has become my pregnant wife.

Pregnant, as in she's carrying our child.

Pregnancy is a crazy but fascinating condition and is perhaps the most amazing feat of the human body. Some days I wonder why anybody would willingly go through with it. But mostly I'm left in awe. Prenatal classes have opened my eyes to an array of processes that are mind-blowing, at best - an orchestra of movements exquisitely performed by the different parts of the body, all to bring forth a little baby. For nine months, the female undergoes a variety of anatomical and physiological changes in order to develop, nurture, and expel a living human being: Internal organs are pushed and squeesed aside; abdominal and pelvic regions are stretched and strained; and hormonal compositions surge and shift - all to make the mother's body a safe and comfortable, even if temporary, habitat for a forming parasite of human proportions.1

Upon learning the various steps of development within the womb, I was increasingly aroused to a sense of the miraculous - and on a few occasions it's even made me tear up. The diversity and quantity of things accomplished from conception to birth are so incredibly complicated it's a wonder pregnancy progresses as succesfully as it does - it's a wonder any of us have made it as far as we have. But prenatal classes did something else, aside from instilling veneration and stupefaction before what my wife's body can do.

Outside these classes, I don't give much serious thought to what's happening. There are a number of reasons for this, not least that we've been beyond busy these days with school and other commitments. Largely, however, giving serious thought to our budding child risks being overwhelmed - being overcome with emotion, not all of which is blithe.

Thinking about my wife and I having a child means thinking about being a dad. Sure, sometimes I'm perfectly content being 'daddy,' with my head on my wife's tummy, feeling our boy or girl kick, punch, push or whatever it is it's doing in there (writing treatises and acting out scenes from the Matrix?). But it's easy to be proud, serene - and even thankful - when I'm cuddling with my family. It's easy to feel confident when there's nothing more than my wife's loving caresses and curious bumps from inside her belly - it's exciting because it's novel. And because there's nothing tangible (for me anyway) to make it real.

But being a dad means learning how to be something I never even considered I would ever be. Rejecting the notion of romance, while still playing at it, is very different from never actually having any serious preconceptions. I never thought I'd be married, though my need for validation through relationships persisted. So why would I ever have thought I'd be a father? That's a whole other field of existence. Being a dad means taking on a whole new set of responsibilities, a whole new identity.

Yet, here I am, three and a half years married to the love of my life, and expecting a child in a mere two months.

In two months I will be thrown into an existence I know nothing of - I will be forced to learn how to be a father, though in reality by definition, I already am one and that now will never change. But in two months it will be more real than any of the days preceding it, and all my anxieties, insecurities, questions, despairs, doubts, and self-convictions will intermingle with the cries of the new breaths taken by a newborn. A newborn that will be mine.

When Jesus calmed the storm from the boat, Mark 4:41 says the disciples were terrified. They were afraid when the windstorm rose up, causing the waves to beat into the boat, and then they were terrified when their rabbi got up and nonchalantly stilled the storm with His words.

Here, in week 30, I ponder at and fear life's miracles. Here, I recognise Adonai doesn't leave everything up to me - my convictions are not necessarily His will - and I recognise that what I plan of life is not necessarily what life will become: it is a journey with so many twists and turns we sometimes end up far from where we anticipated. Here, I acknowledge that despite my sense of inferiority, I can in fact be used for a purpose - I do belong, I do have and give meaning, and I am worthy of love.

Here, I hope and pray that some day someone will say of us what me and my siblings say of my parents: they are the best. And maybe I'll never feel worthy of such praise, of such love, but it seems like Adonai somehow feels like I can handle what's to come the way I've handled what came.

Here, I ask El Gibbor - the Mighty God - when I see the tide coming, if He even cares that I might drown, fearing the weight of what is waiting. And here I'm filled with awe when He says, 'Peace! Be still,' and everything seems like it's all okay, fearing not only Elohim, who is much bigger than all of these silly worries, but also fearing that everything could very well be okay.

'Why are you afraid? Have you still no faith?'

1. I mean this in the most affectionate way possible - it is a beautiful parasite, whom I already kind of love.