Some time ago, in the bathroom of a work client's, I came across a children's book by Laurel Porter-Gaylord that I was compelled to open and read. It was entitled, I Love My Daddy Because . . . and featured the drawing of a lion with his cub on the front cover.

Inside, the book consisted of one-page drawings depicting different animal-fathers and their offspring in various activities. For example, the page with 'He keeps me warm and safe' has a drawing of an Emperor Penguin with its chick between its legs, under its blubber - and they're smiling at each other. On another page, there is a Bald Eagle in a majestic pose with its chick admiringly looking up at its father; the caption reads, 'He is big and strong.' On yet another page, the drawing of a human man playing puppets with his daugther is shown with the caption, 'He plays with me.'

This is undoubtedly a cute and entertaining book - even educational, as each page with an animal has at the top what the name of it is (i.e., 'Horned Puffin with chick'). But it made wonder. Is love always this conditional? Does this book promote a self-centered perspective on love?

Do we love our fathers because of what they do for us?

I could never relate to the absentee father concept. While my dad at times did work two jobs, I actually only have one memory of him leaving in the evening for work. I have a lot of memories of us as a family, and as a child doing things with my dad. I have plenty of memories of playing catch in the park or in the yard with my dad, and of asking him as a young child to draw me a motorcycle (he drew amazing motorcycles, partly, I'm sure, because he used to drive them). I have memories of 'helping' him when he was building something in the backyard, and of going for car rides with him - as well as going to work with him if only to spend time with my dad while he delivered water in the surrounding area. I remember him reading stories to us at bedtime, and the times he'd tuck us in. I remember asking him questions about God and about life. I remember being kissed by him and hugged by him.

There was never any doubt as we were growing up whether our father loved us or not; we always felt taken care of, as well as cared for. We never lacked for anything, especially not affection. 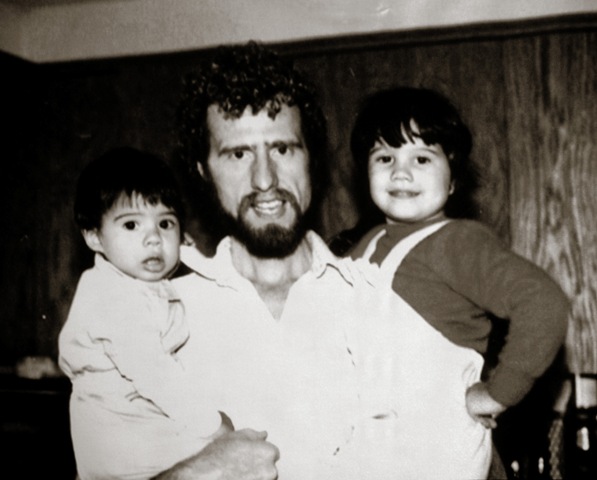 Me and my sister with Dad.

But my dad was still the authority. He still laid down the law and disciplined us when we needed it - and sometimes we certainly needed it. And deep down, every time we got spanked, we knew we deserved it - we knew we had seriously disobeyed. We knew there was a reason for our punishment. I remember plenty of times getting the belt, and I remember a handful of times why it is that I was disciplined.

My dad was always there for me. To be sure, he still is. And while I - in the whole of my person - am indebted to his fatherhood, it is only a part of why I love him.

My dad is one of the most generous people I've ever known - some might say to a fault. He is a good example of someone who is self-sacrificing, often putting others' needs before his own. If he could, he would give you everything in his wallet if you genuinely needed it. But my dad is also steadfast, holding his ground when he feels he's in the right and arguing his point unabashedly. He's a very gentle, caring man but he'll be in your face if the situation calls for it. He has a big heart and only wants what is the very best for those he loves.

My dad is a hard-working man who truly loves what he does. His perfectionism and determination allow him to find solutions where everyone else has given up. His gung-ho attitude spills out into the rest of life, teaching us what his mother taught him: 'Life is what you make it.' His laid-back personality, which has been passed on to my brother, lets him easily roll with the punches and adapt to ever-changing circumstances; he never worries and rarely ever does he stress or fret. Eager and willing, he's unafraid to try new things - a trait which found him doing missions work several countries away from home. 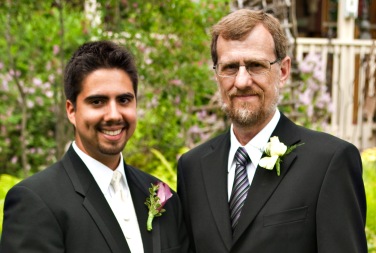 Me and my dad at my wedding.

My dad is wise and open-minded, but simultaneously holds firm to what he knows is truth. He possesses an astounding amount of life experience, being shaped by all the ups and downs he has gone through as a child, a bachelor and a married man, compounding his wisdom by leaps and bounds, and never diminishing his positive perspective.

My dad has a quiet faith, but a strong one that is unshakeable. His life story is one punctuated by Adonai's involvement, and my dad's trust in Him. My dad's faith is deep and informs his worldview as well as his actions. He takes care to be a deliberate Christian example, and his example has been one I've always admired. He has taught me spiritual patience and to not fear approaching God with questions while still trusting in Him.

My dad is a devoted husband of 36 years and a devoted father for 30 of them. I am blessed to not only have a great relationship with my dad, but to also get the chance to work with him. I have learned so much from this man - and not only from deliberate teaching, but immensely from his example. I know I have much more from him to learn - and not just about renovations and carpentry, but about relationships, faith and life in general - and I look forward to being taught.

I love my daddy because of who he is - and he is a widely respected, admired, and loved man. A great, loving, generous, faithful, determined, wise, and skillful man. I'm very lucky - and very grateful - to be one of his sons.